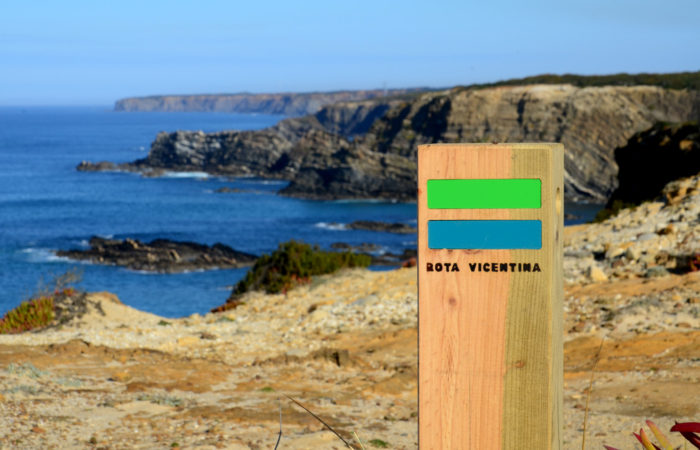 By Annelise Schoups on January 4, 2016 in Travel Tips

It goes without saying that the European continent has a lot to offer a traveler. Portugal, in particular, though one of the smaller countries, has a vast array of tourist attractions. Sometimes lovingly labeled as the California of Europe, the west coast similarities can be striking. Lisbon, for example, is built on hills and touts a big red bridge, much like the famous Golden Gate of San Francisco. Meanwhile the surrounding beaches, and the people who flock to them, are as colorful as they are beautiful. 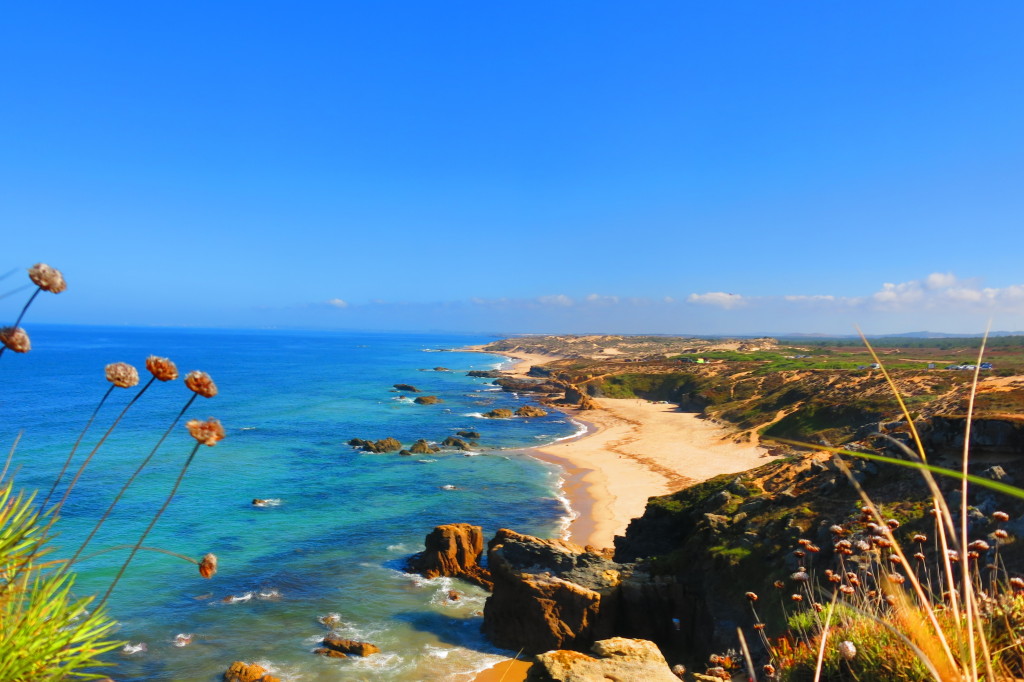 Portuguese Coast while hiking along the Rota Vicentina

Since one could argue that all cities are alike in some ways, touring rural locales, like by hiking the Rota Vicentina, is an ideal way to explore the country’s true beauty. A relatively new trail, the Rota Vicentina snakes its way along the southwestern coast of Portugal, where you’ll find preserved wildlife and a number of endemic species. It begins about two hours south of Lisbon, near Sines, and, depending on your level of persistence, continues almost all the way to the end of the world, or Cape Sagres as it’s also known.

Included within the Southwest Alentejo and Vicentina Coast Natural Park, it is 350 kilometers, or approximately 217 miles, in total and there are two routes by which you can trek the two-year-old trail. One path, The Fishermen’s Trail, winds its way along the coast, while The Historical Way carves its own path inland. Should indecision strike, you can take comfort in knowing that the paths cross and merge on occasion. This way you can pick and choose as you go, much like a choose-your-own-adventure novel, but with more sand.

A farm on the Rota Vicentina hike in Portugal

In addition to the natural wonders that sprout along the way, the beauty of this hike lies in its structure. Unlike other week-long treks, the Rota Vicentina trails are split between small villages sprinkled throughout the region. At most, you hike around 25 kilometers (15 miles) per day but even that isn’t entirely necessary. If you can stomach the weight of camping gear, there are also designated camping parks where you can rest your soles – and souls –  along the way.

The towns, which give you a quaint look into the mosaic of Portuguese life, also make the trek more appealing by breaking it up. Because you can find accommodation and nourishment at the mapped locations, you’re not forced to carry as much food, water, or gear as you would on other hikes of this length. The website has helpful recommendations for planners, though it can be pricey, and the trail itself is littered with friendly folks who are otherwise happy to lend a hand. 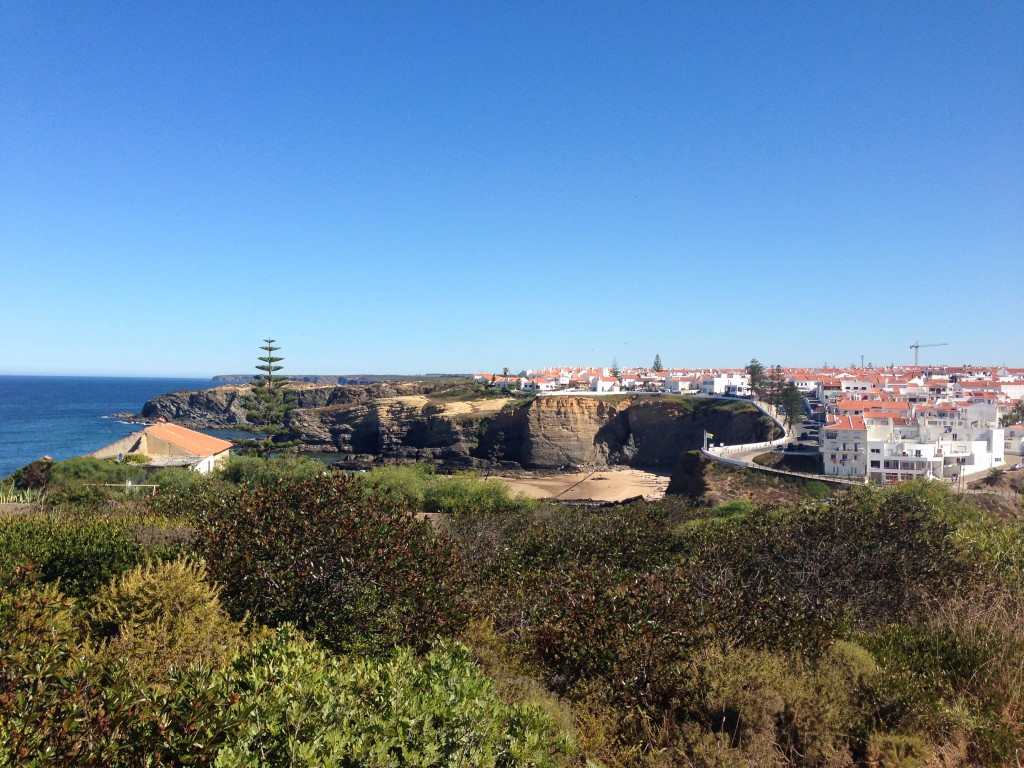 Whichever way you decide to go, you will be widely rewarded with breathtaking views, ever-changing landscapes, and long-lasting memories. Ultimately, if you enjoy long, romantic walks on the beach, this trail was made for you. Only a handful of things could make the trip more enjoyable, if not easier.

Hints for Hiking portugal on the Rota Vicentina

A Backpack
In theory, you could go without one, but carts and covered wagons are a lot harder to get across the sand. The upside is that your backpack

doesn’t have to be anything heavy duty, just something to get you through the day. Somewhere you can stash your sweatshirt after the morning chill burns off or store small essentials like chapstick and sunscreen

Water
Ideally you wouldn’t tackle any trek without one. Most trekkers recommend going in spring, but your rebellious spirit leads you here in the heat of summer, you’ll need to hydrate. To be safe, you want two to three liters

per person on average, and it’s best to plan ahead since there aren’t any refill stations between the villages. Besides, ocean water can be salty.

Gummies
Seriously. Gummies are great for hiking because they provide quick energy your body can burn, meaning the excess sugar won’t lead to a weight gain at the end of the day. After lunch, when your legs are heavy and you’re feeling sluggish, a few sweets will give your body the push it needs to get going again and power through. Chocolate is also a great option here, as long as you note that it gets messy when it melts.

A Camera
Even if it’s only your phone, because it’s too beautiful not to show off. If or when you finally return home, pictures will help elevate your reputation as an awesome traveler. The combination of cliffs and sand, farms and lighthouses, land and sea will leave even you wondering if you’ve ever seen anything like it. Bring a camera if only to go back and check.

A Headlamp
A headlamp

isn’t as necessary as it is complementary. On some of the longer days, it’s best to get started early. As in before dawn early. A headlamp frees your hands for climbing and catching yourself while still being able to spot the toads that serve as the soundtrack for your stroll. While I know that dark and early doesn’t appeal to everyone, a majestic beach sunrise in front of an island fortress definitely does.

Sunrise on the fortress hiking along the Rota Vicentina

A Towel
You might think towels are bulky, but travel towels

come quite compact and the beaches are as frequent as they are irresistible. Since some of them are nude, your towel can take up whatever space you saved for your swimsuit. Don’t worry about keeping your secret safe, the locals will get rowdy if anyone stops for a photo opp. So, go ahead, do as the Romans did.

A Knife
For lunch, après-lunch, and maybe even supper. Some of the best local hiking eats include meats and cheeses. Cured meat enthusiasts in particular will find themselves in chorizo heaven on this hike. With a new selection to choose from every day in town, you’ll always have something to open and your picnic will look indescribably more appealing if you bring a small knife

to slice and dice.

is essentially a personal lubricant, but not the kind that may come to mind. It comes in the shape of a deodorant stick, and, when applied to the body, can reduce friction and chaffing in areas that tend to rub. Even if you sport a thigh gap, I highly recommend it for your feet, chest, or any place your pack may wear. It beats a blister any day.

Outside Ahoy Hostel in Porto Covo

A Book
Mostly for entertainment. While most hostels have wifi, some of the places you’ll stay will not be all that modern, especially if you camp. A book is always good company on the beach, and if you bring a writing utensil it doubles as a place to take notes. You can jot down the places you loved and the people you met, or write yourself a reminder to review Ahoy Hostel and thank Nick for all his help.

Vinho Verde
Okay, so maybe don’t bring the Vinho Verde in your backpack, but definitely get it at one of your stops. Although the literal translations would call it a green wine, it’s not a thing of Dr. Seuss stories. Instead it’s white, slightly effervescent, inexpensive, and it pairs well with your well-deserved dessert. Sort of like a sparkly Moscato that’s as sweet and refreshing as your adventure.

Annelise is a California native and dual American-Belgian citizen. She's lived in all three West-Coast States and taken with her a love of sunshine, nature, and journalism. She believes in exploring places through food, on foot, and in the company of locals. Follower on Twitter @annelisewrites
View all posts by Annelise Schoups →